Well folks, just when you thought the world couldn’t get any stranger, along comes the Corona Virus, or COVID-19 as it’s technically known, to reveal an insight into humanity.

And while it is tragic that people are dying from this virus, the behaviour of humans during these early stages is curious to say the least. I promise to spare you from any puns in this story as I share examples.

Example A: Sales of Corona Beer are either declining rapidly or on the rise, depending which “news” you read. If sales are declining, one has to wonder how a significant mass of people assumed the virus was transmitted by Corona Beer? I thought beer drinkers were educated folk? The brewer has called on that famous beer connoisseur Snoop Dogg, to save the day and restore sales via a celebrity-driven campaign called “La Vida Mas Fina.”

Example B: In a complete act of madness, Australians have gone totally bonkers and are hoarding toilet paper, also known as bog rolls, bum fodder, poop mittens and other terms. The populace has also gone stupid for hand sanitizer, wipes of all varieties, paper towels, baked beans (maybe to fill the bog rolls?) and other dried foods.

This just goes to prove a couple of marketing adages:

1. People are firstly, and only, interested in themselves. WIIFM Rules OK!

When people see a marketing message they subconsciously ask “What’s In It For Me? It’s why your message must be clear and demonstrate in simple terms, what’s the benefit for the punters.

If you’re a fan of Maslow, this current behaviour fits right at the bottom of the pyramid – basic needs. In the case of the Corona Apocalypse, people have stocked up on basic food and sanitary items, without a care for others. Whole supermarket shelves have been decimated. Though I’m sure once people have stocked up and looked after themselves, they’ll have a square to spare. Unlike Elaine Benes who couldn’t get her cubical neighbour to share a square.

Can you spare a square?

The mass stocking of bog rolls et al, was not something encouraged by government or news outlets. It occurred because people didn’t want to be left out – they wanted to follow the crowd and not get left behind. It’s one of our social needs – to be part of a group – and a major trigger behind tiered consumer products that give higher privileges, the higher up the tier you are eg Platinum or Black charge/credit cards. Never underestimate the power of FOMO.

Though the good thing about Doomsday behaviour, is that you only have to admit it if it suits the social situation. You don’t have to share your actions with anyone unless it gets you favourable comments.

This buying frenzy has caught manufacturers by surprise. These normally reliable bog roll producers are working around the clock to keep the paper rolls up to the public.

who gives a crap is working overtime… 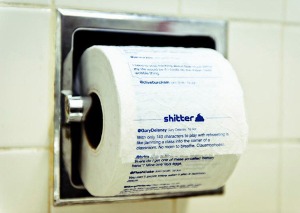 But the weirdness does bring out the best in Australian humour.

Today the NT News – famous for its headlines, such as “Why I stuck a cracker up my clacker” and “They stole my dog while I was on the bog” – did a wonderful favour for the NT community. The newspaper printed an 8-page insert of single-ply toilet paper for readers. The pages come with a watermark map of Australia and perforations so you can tear individual squares. Bloody ingenious and very thoughtful given the current shortages.

Am not sure which pub, but one is giving away a free bog roll with every Corona bought – solving two problems at once.

FREE toilet roll with every Corona

Meanwhile on Sydney radio – every caller who rang Jonesy and Amanda on WSFM this morning, and shared information about where to buy a bog roll, received a free roll and free hand sanitizer. #jonesyandamanda 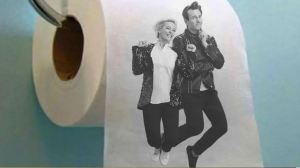 Jonesy & Amanda doing their bit for the community…

My good mate The Brand Guy, Richard Sauerman got his staff bonus today…

While hopeful hustlers are trying to find the day’s sucker on eBay:

And then there’s this bloke who is expanding his franchise: 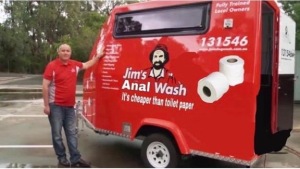 Want to buy a franchise?

It often takes a crisis for innovation to arise and it’s good to see the Aussie intuition has risen to the occasion, despite the toilet humour:)

Gotta go now – so to speak. I wonder if we have any dunny paper???