Republished with the link to the original David Ogilvy tape.

This story starts close to home in Australia. There are two brothers who work for a television network in Sydney. They are known in the industry as the “Boring Brothers” because quite simply, they are the dullest males on TV. They make airport runway tarmac positively fascinating.

This week they are in the media spotlight because of an animated conversation between themselves. It was recorded or noted, by the Uber driver who was driving one of them home. Apparently, in their conversation, they dumped quite a bit of doo-doo on their colleagues and management, while bigging themselves up as something way above their pay grade. 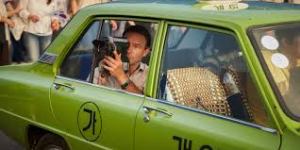 No sir, I’m not recording your conversation…

As a result, their competitors in the media are having a field day.

It reminded me of the lengths advertising agencies used to go to during pitches for new business. Sometimes it involved fake taxi drivers, while other times it was hidden spies in the loo.

If the pitch was at the agency, more often than not the prospective client would get a taxi to the presentation. Agencies would even fabricate lies that their car park was under repair, so clients couldn’t drive to the meeting.

Once the pitch was over, the agency would offer to call a taxi. Said taxi would either be driven by an agency person, or the taxi driver would be tasked with recording the conversation on the way from the agency back to the client’s office. The driver would be given a financial reward for their co-operation.

So, how was your meeting?

Nothing was too sacred when it came to getting inside information.

Now, unless you’re an old-time Ogilvy staffer, you wouldn’t know that David Ogilvy turned down Chester Carlson’s sales manager when he came to Ogilvy & Mather asking if the agency would advertise the company’s new invention. FYI Chester invented xerography and was the founder of the Xerox company. David arrogantly turned Hector away, because he hadn’t heard of his company or product, something he always regretted.

For a number of years the agency I ran, Ogilvy & Mather Direct, held the Xerox account in Australia. Then Xerox decided to invest in a branding campaign, so Ogilvy & Mather (the ad agency) wanted in on the pitch. Given David’s history with Xerox, the agency thought it would be a good idea to get him to record a video message of regret, encouraging Xerox to appoint O&M to the business.

This video will impress those Xeroids…

David obliged and the tape arrived by courier from his office in Paris – things were different in those days. You can view the 2-minute tape here. It was used to open the presentation and it put the agency team in a very positive mood. It was a coup to be sure, to have the great man David Ogilvy attending the meeting virtually, and apologising for his errant ways from decades earlier.

During a scheduled break in the pitch, the agency did what all agencies did, placed spies in cubicles in the toilets, to listen for any juicy insights. Two Xeroids entered the male toilet and stood at the urinal. The agency spy was poised on the loo to capture useful tidbits.

I will record every word they say…

One Xeroid asked the other, “what do you think of the presentation so far?” The other replied, “pretty good, but who was the old guy in the video tape?”

The spy couldn’t flush fast enough and get to the agency MD before the restart, to advise the horrifying news – the agency coup de grace had flopped. Everyone at O&M knew who David Ogilvy was, as it was a career-limiting move not to know. But the agency team had mistakenly assumed everyone at Xerox would know too. Of course a sales manager from Xerox wouldn’t have a clue.

I shared this story with D.O. at a meeting with him in NY a year later. He just smiled and said, “well we can’t all be worldly fellows can we.”

The agency did get the business. My final role in the pitch had something to do with wearing a turkey suit, but that’s another story.

Gotta get to a meeting. Should I call a cab?