As you know dear reader the marketing industry follows fashion more than any other industry. Not wearable fashion, but the latest buzzword, shiny digital object, alleged tech trend, font or photography style.

Recently I’ve noticed the current trend appears to be a fascination with nudity, or the word naked to be exact. It seems naked is trending as a label for all sorts of products.

In Brisbane recently I passed this sign advertising a burger – well it’s not a normal burger it’s a naked burger. I assume the customer wears clothes when munching?

The headline under the title says “strip off the bun on any burger” with a subhead “served with relevant toppings in a lettuce cup”. Sadly I don’t have a picture of what a burger without a bun with topping in a lettuce cup looks like. I’m thinking a prime rump version of sang choy bow maybe? How does it soak up the beetroot juice?

The next day I walked around the corner from my hotel and staring me in the face was this giant outdoor poster. 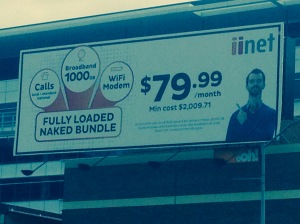 Then a few days later while driving in peak hour in Sydney with my kids, I followed this taxi-back ad.

I have no idea what it’s selling? Despite working in the industry most of my life, I’ve found the best judge of advertisements to be my kids. If they don’t understand the communication quickly, then how will busy adults? They couldn’t tell either.

This poster (and I’ve now seen other versions of her in different poses of undress) has an image of a semi-naked women with a headline “No Naughty Bits“. Next to her is a circular stamp “Aussie Bodies“. So we still have no idea what’s being sold – swimming costumes by Aussie Bodies?

There’s the word “NAKED” in bright red on what appears to be a chocolate or snack bar of some sort. You can imagine the high sugar count, given how humans make assumptions based on experience.

None the wiser, my kids and I crawled through the traffic before being affronted by a double-barrel dose of nakedness. 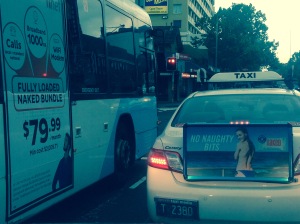 That’s right dear reader – our vision was filled with a fully loaded “nakedathon“. The word naked was on headlines on both the bus and the taxi, there was a semi-naked bikini girl in front of us – just the sort of stuff to stare at while waiting at lights. My daughter asked “why are these advertisements all about being naked dad?”

“I have no idea” was the best I could muster. Though research has revealed the taxi-back is flogging a protein bar – obviously.

Now this ad uses the word “naked” to good effect – the reader understands immediately why the word is in the headline as it’s relevant to the proposition. 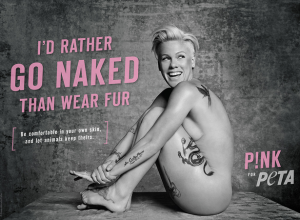 But to invent a brand name from an over-used word all sorts of other products (like telcos and burgers) can use as an adjective in their ads, is not necessarily smart. A quick search for “naked protein bars” reveals the following:

The protein bar industry is fascinated with nakedness. So calling your protein bar “Naked” and then promoting it obscurely is not very original. It probably means you have to invest way more money than your competitors to stand out from the crowd.

Then again if the adage “sex sells” is true, maybe you could just use a half-naked bikini girl on a taxi smiling suggestively about naughty bits…