Yesterday, I received an email from iSubscribe – an online magazine subscription company. I’m a customer.

Here’s what I could see through my preview screen: 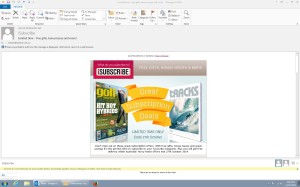 Given the enticing offer, I clicked on the link with some enthusiasm, looking for an idea for Christmas presents. And here’s what greeted me: 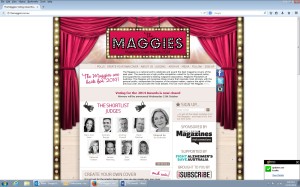 We enticed you with offers but flog you magazine awards

The landing page was interesting – mainly because there were no “great subscription deals” as advertised in the subject line and email message. Instead there was an advertisement for a magazine awards event.

What lunatic thought it appropriate to offer magazine subscription deals and then send recipients to a landing page promoting an industry award show? The institution at which they got their digital marketing qualifications should be shut down immediately. There is absolutely no correlation between the email and the landing page.

At first I thought it might have been one of those domination ads that take over your screen, so I clicked and scrolled, but to no avail.

Here’s the rest of the page: 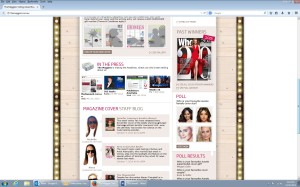 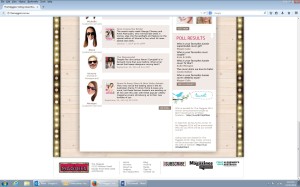 This is the equivalent of Woolies offering discount groceries and then sending you to a landing page for their Employee of the Year nominations.

I closed the message in disgust. The only good thing to come from it was an idea for a blog:)

Then today I received another email from them. They’re prolific if nothing else. The subject line said: And the winner of The Maggies 2014 is…

Personally I don’t give a stuff about the Maggies. The fact that Who magazine is a winner of any award says it all. In case you’re interested here’s the email message: 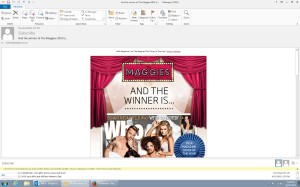 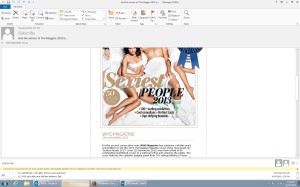 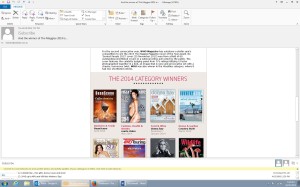 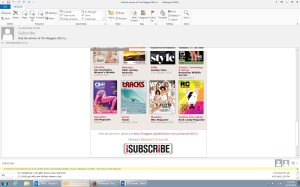 As you can see there are still no free gifts or bonus issues. Maybe this is the “more” they offered initially?

So dear reader, do I unsubscribe? Or do I go to www.magshop.com.au and shop there?

No, I think I’ll go to my local newsagent instead. They sell last month’s magazines at half price – better than subscription rates. In fact, I could probably put them in the post reasonably cheaply?

Hmmm, there’s a big idea – a subscription business for one month old magazines. Better get some crowd funding started. Where’s my Twitter log-in?

This is so exciting. I could win a magazine industry award!! 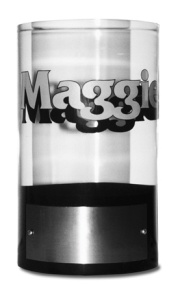 And the 2015 winner of most innovative magazine business is…