Like most in our industry I’ve won a bunch of awards and I’ve also been Chairman of Judges, as well as a judged numerous award competitions – both marketing and advertising.

In some ways, awards aren’t difficult to win. I remember one agency was famous for the amount they scored each year. The reason was simple – they submitted more entries to each award competition than any other agency. They had a specific line entry in their budget expenses for award entries. In one year I was Chairing, they submitted one third of all entries and there were almost 200 entries!

The best work in the market doesn’t always win an award – only the best work in the entries submitted. Because many marketers don’t enter award competitions. Hence the cliche “awards are just a function of entries”. The law of averages says, more award entries you submit, the more awards you’re likely to win.

So make a cuppa and enjoy Jerry Seinfeld’s 5 minute speech when accepting a Clio Award – it’s not only spot-on but funny too. I wonder if it will win a comedy industry award? 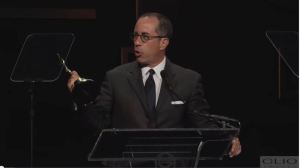