I declare some self-interest here folks. I haven’t bought or worn a tie in more than 20 years. Can’t stand the things. But I suspect my opinion on this subject will divide you dear readers – and I’m speaking strictly from a male point of view for those politically-correct types.

I’ve always thought ties revealed that most blokes were either colour-blind or they lacked any fashion sense. I’ve yet to meet a male who says “the best part of the day is putting on a tie“. Nor have I experienced any water cooler conversations where blokes admire colleagues’ ties, paying compliments such as, “nice throat choker Ted, it really sets off your eyes – and goes well with those new brogues.” 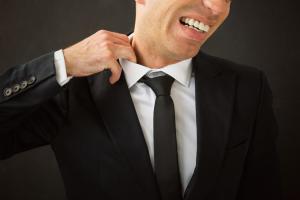 I just luv wearing a tie with a suit, particularly in a Sydney summer…

It always seems to me, the people who most like men wearing ties are their female counterparts. A tie can make a suit look sharper, but that’s the point. How it looks might appeal, but how it feels is another story.

Having a tie tied tightly around one’s neck is probably the most uncomfortable experiences of working in the commercial world. But thanks to the COVID-CRISIS most blokes have enjoyed the liberty of a tie-free neck.

I have noticed some males wearing a tie in their video calls and assume it’s because of they believe a tie reflects a certain image that they perceive they must project. This of course, is nothing but conditioning. Given the choice – the vast majority of males would rather go about their work unencumbered by a throat choker.

I’m also curious that the females of our species are the ones who say a tie looks good on a bloke, but I see almost zero evidence of ties in female work attire. I wonder how many would wear a tie if they assumed it was expected of them?

I don’t even own a black bow-tie. For formal occasions I wear a mandarin collar, so I dress formally but sans-tie. 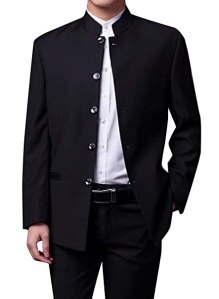 So, to join the marketing hustlers and their post-COVID predictions, I’m going to predict the wearing of ties to work will decline rapidly, once we stop working from home. I certainly won’t be investing in any shares for companies making ties.

I also suspect there will be an increase in shoe sales, as people will no longer fit their current shoes having spent months working barefoot in their homes.

Please line up to disagree with me. I’m happy to tie one on with you if you’d like to discuss the subject further…