But given the increased amount of television and outdoor advertising that Uber Eats is doing lately, I thought I’d revisit it. Curiously, I’ve not seen any Uber Eats advertising online…yet. (now that I’ve mentioned it, I’ll probably be chased around the web thanks to cookies)

By way of background, I’ve owned a suburban supermarket and a travel agency – in different suburbs in different centuries. For both businesses, one of the most powerful media for generating retail store traffic and sales, was unaddressed mail. I’ve also produced loads of retail catalogues and other letterbox collateral for my agency’s clients.

Yet despite the fact we live in a ‘digital world’ the letterbox is still one of the most profitable channels in which retailers can promote their wares. Truth be told, most retailers would struggle to survive if this channel was not available.

Just this week, that most uber of digital disruptors – Uber Eats – dropped an offer in my letterbox. 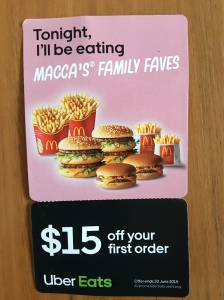 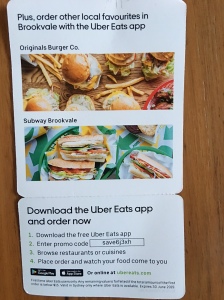 And so did the following brands:

So if you’re under the delusion that we now only live in a digital world, get off your screen, go outside and check your letterbox.

Gotta go and do the shopping now – where are those catalogues?