In haste two years ago I had to buy insurance for a car I bought second hand. I did a quick search online and ended up with Youi after they sharpened their pencil. They tried to increase the premium after twelve months, despite having no contact with me in the first year of the policy, so I challenged them and avoided an increase.

In the first week of December just over two months ago, my car was damaged by an anonymous driver. Well I know who did it – it was a truck driver doing work for the NSW Roads & Maritime Department. I parked my car across the road and that afternoon all these trucks parked opposite it, in preparation for night work on our road.

When I went to drive it the next morning the roof rack, top of the rear hatch and rear door were smashed – the damage was at the same height as the rear trays on those same trucks carrying the road working machines the night before. No apology note, just smashed car bits on the road. My taxes at work.

My taxes at work…

So I ring Youi and explain the problem. They direct me to a smash repairer to get an assessment on the damage. I left the car with the repairer and he rang me later that day to tell me the claim had been approved, but as it was three weeks before Christmas they didn’t want to do the job. Too close to their holidays – bugger mine. I’d have to bring the car back on the 12th January!

This meant I couldn’t use the car for the holiday period, as one tail light was smashed. Hours after the smash repairer visit, I received an automated text message from Youi telling me the claim was approved and to take my car to the smash repairer. Gotta luv technology.

Then I get an automated text from my “dedicated claims advisor” who processed the claim, saying I could contact her with any questions relating to the claim. So I did. I asked her if my policy had a rental car in it, as I couldn’t find a copy – it had been emailed not mailed. I didn’t get a response. I sent another message asking for an alternate repairer – and you guessed it, no response. 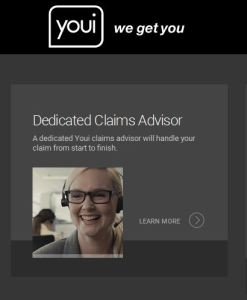 my dedicated claims advisor didn’t get me…

Frustrated, I ring Youi and ask someone if they can help me. They tell me there wasn’t a rental car in the policy, so at least I knew the situation.

Then I get an email with the following subject line:

It was sent from the passionate Youi Team. As you readers know, any marketer worth their salt, never sends an email from a team. I’ve written about this before – teams don’t send emails, individuals do.

The survey is dysfunctional:

We’re passionate about providing you with awesome service which sets us apart from other companies.
You recently had a claim and we’d like to know how you felt about your service experience with us.
Click on the word that best describes the level of service you received from Josephine Marvelous. (I replaced the advisor’s real name)

I couldn’t answer the survey. The telephone service to get the claim approved was good. Josephine did the job she is paid to do. Though I’ve never really considered a claims clerk noting answers to questions, was something to regard as “awesome” – but hey, I speak English, not Marketing, in my daily life?

The problem with the survey of course is my overall claims experience has been an awesome horror – yet I cannot explain this within the survey, without implying Josephine did a bad job. Who designs this stuff? Do they live in the real world?

So I replied to the team with a long email message about the fact they couldn’t get my car repaired until the new year and asking for help. Not one of the passionate team members has had the courtesy to reply. Another win for automated marketing technology. The computer can send me a survey from the Youi Team asking about “awesome Youi” but the poor old sod who pays the team’s salary cannot send one back to them.

I have no idea if my message made it – the address was surveys@youi.com.au and I didn’t get a bounce notice.

The new year is rung in and on the 12th January I deliver my car to the smash repairer. Seemed to be a bit of a family business, given the bloke I spoke with referred to his missus not being in the office yet. He used a highly sophisticated CRM system “Just write your name and mobile on that pad and we’ll call you when it’s ready” he said. So I wrote my details on the scrap of paper and tore it off, leaving it on the bench.

He said the job will take about two weeks. In the meantime I finally get an automated email from Youi. Is the awesome team alive and acknowledging me?  No. The email has nothing to do with my claim. In December my credit card expired, so I had to endure the horrors of trying to update the card on non-user-friendly websites. They never make it easy do they?

One of the monthly automatic payments was to YOUI. And now they wanted to talk with me because my payment had not been cleared due to the expired card – nothing to do with my claim. They chased my money, but gave no service for the payment.

Three weeks after dropping the car off I’ve heard nothing – from Youi or the smash repairer – so I ring the repairer. “Sorry mate, the parts have to be imported and take 3 weeks, so it won’t be ready until next month“.

“Why didn’t you order them in the first week of December, so they would be ready when I returned in January I asked?” Silence on the other end of the phone.

It’s now been more than 2 months and I still don’t have my car. I’ve sent Youi texts, emails and phone calls in response to their awesome marketing automation messages – and I’ve had nothing in reply.

Their brand is being built by a non-thinking smash repairer and an automated marketing machine – it’s no wonder my opinion of Youi is a tad less than awesome.

Even worse, their ads with the smarmy presenter keep interrupting my television viewing. My kids, who I consider very good judges of ads, as they are not tainted by too many life experiences, have always found the Youi presenter “creepy” and “a bit sketchy” – to use their words.

And the Youi tag line is “we get you“. Well they certainly got me – they got me well and truly p***d off.

Of course for my troubles I’ll have to pay an “excess”. Is it just me or does that term irritate the hell out of you too? It’s just an artificial gouge to save insurers money. I already pay an excess, it’s called the premium. That’s why I buy insurance, to insure against an accident – why should I pay an excess, when the insurance company took the punt and gave the odds?

Regardless, Youi needs to add a layer of human customer service between their awesome marketing automation and their customers. And they need to stop worshiping at the alter of marketing mediocrity and start communicating like humans, not like marketers who naively believe their own media releases speak the truth.