My Sydney readers will know the horror that is the entrance to our domestic airport terminal. In the history of all airport design, the Sydney airport is the worst in the world when it comes to accessibility by car.

Six lanes converge from three different directions at one set of traffic lights. Fifty metres along from this major intersection, is another set of lights allowing an extra lane to join the traffic jam just before the terminal. 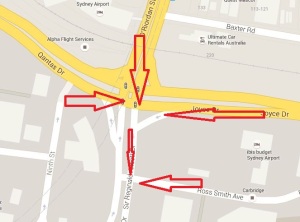 At 6am in the morning you can arrive at this intersection and then take another 30 minutes to travel the 400 metres to the car park entrance. Once you enter the car park, you then drive back in the direction you came, to park about 300 metres away in another post code.

This all affects your ability to make your flight on time, particularly when you add in the queue for the security screening and likelihood you’re boarding at Gate 19, which is located the furthest point from the terminal entrance. This was one morning last week at 6am at the Qantas terminal:

Consequently the valet parking service has boomed, as it is located just inside the car park entrance, a quick walk to the terminal. It helps reduce the stress associated with the simple task of parking one’s car at an airport. Why would planners make parking an easy task, let alone a cheap one?

I use the service at least three times a month. Two weeks ago on a Friday evening, in the middle of peak hour, I arrived to collect my car. Normally it appears within five minutes. Ten minutes passed, when a driver whose English is a second language, approaches me holding half my car key. The half that doesn’t have any key. It’s the section with the battery for the door lock.

“Do you have the key?” he asked/pointed in a confused manner. I suggested that as he worked for a valet service and they had parked my car, it was unlikely the key had mysteriously found its way into my hands after I’d dropped the car off the day before. I had after all, been interstate.

I asked him “What happened to my key? Where’s the front half with the key bit? Who busted it?” He looked confused and said he would keep looking. There then ensued a treasure hunt around the car park floor and in every key box in the office by men in hi-viz vests, looking for half my key. I stood idly by, watching the time – I only had to be home for my daughter’s birthday dinner! Though the kind staff offered me a chair while I waited.

Unfortunately the key hunt resulted in nothing being found. Upon inspection of the remaining half of the key, I suggested the way it had broken, indicated the possibility the front half of the key might be in the driver’s pocket.

“Where’s the driver?” I asked. “He works the morning shift and has gone home“, I was told. At this point I’d been waiting about a half hour, so you can imagine I was a tad upset. I’m about to demand Pronto pays for a cab to take me home and then back again (tomorrow) so I can bring my spare key to collect my car – not to mention cover the cost of repairing my key.

Before I could speak, Sam the supervisor apologised genuinely for the inconvenience. He said they were ringing the morning driver to get him to check his pockets. If they couldn’t reach him, one of his staff would drive me home and get the spare key. He would then return to the airport and drive my car back to my home followed by another staff member to collect him. 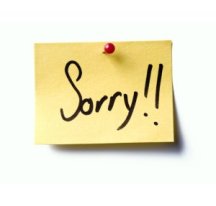 How could I be angry or upset – despite the delay and impending peak hour traffic? Sam calmly explained everything they had done and said he would be back as soon as they reached the driver, or if not, in ten minutes. I had been texting updates to my family, who were not amused – so I shared the news.

About 5 minutes later, Sam said they had made contact with the driver and sure enough, my busted key was in his pocket and not yet in the laundry tub. He was on his way to the airport, in peak hour, and would be here in about fifteen minutes.

And so I waited some more. One bloke who had observed a few minutes of my fun, shared his story with me while waiting for his car. Apparently he left a Land Rover with them a few months ago and when they brought his car up for him, it had miraculously turned into a Maserati! I thought I might get lucky and score an upgrade too – but no luck.

Maybe they’ll upgrade my car to a Maserati?

My busted key arrived and Sam completed the evening by offering me free parking on my next visit.

If only the supermarkets, telcos, banks, utilities and other bureaucracies could provide service like this when something goes wrong. We can only live in hope.