As Mark Twain said, “Reports of my death are greatly exaggerated” – and so it is with the print industry.

The hysteria surrounding the imminent death of print is almost hysterical itself – particularly given the complete failure of the paperless office claims since the 1980’s. The death of paper is not on any horizon – print advertising in its various forms will continue to succeed.

Kellie Northwood, the Executive Director of the Catalogue Association in Australia, is very buoyant about the future of print. She commissioned Roy Morgan to research the industry. The results were quite revealing, though not surprising.

The Report shares case studies, international trends, innovative applications and more, to demonstrate how to use print successfully in any marketing mix. You can read the results here.

And quoting from examples, “With paper and print the complete spectrum of senses is explored. Who would have thought a supermarket could educate children how fresh herbs, fruits and vegetables smell and feel? A poster could enable abused children to report the crimes against them? Or a magazine cover turn red when placed in direct sunlight to promote skin-care?”

The research also confirmed something we knew intuitively, but now have the facts to prove. More people (59%) who receive an invoice or statement online via email, require a follow-up message to pay their account, than those who receive their accounts in the mail.

In fact, any savings gained by forcing people to get their accounts by email, are often wasted in the cost of chasing up these people to pay their bills on time. Plus there is the cash flow lag caused by late payments. Digital invoices can be a false economy – and often an even more expensive process than mailed invoices.

The alleged benefits of digital distribution – cheaper to email than to mail – are offset by the fact people are not as engaged with digital channels as they are with physical channels. This fact is scientifically proven. And supported by independent credible sources: 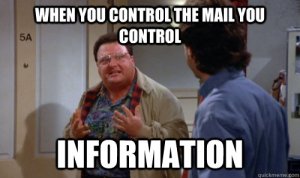 Here’s how my cousin – a very smart businessman – ensured his bills were paid ahead of time. He called all his debtors to determine the name of the person in charge of processing his accounts for payment.

Whenever he mailed an invoice, it was personally addressed to the accounts payable clerk. And inside every envelope, as well as an invoice, there was a $2 scratch lottery ticket.

The clerks loved receiving his invoices and they mostly paid them in 15 days, well before the due date. So his cash flow was sensational, which went a long way to increasing the value of his business when he sold it – which made him very happy.

So if you are rudely penalising your customers by fining them a couple of dollars to mail them their financial statements, you might want to think again. You could be improving the value of your business by mailing them a printed statement at no charge – like the whole world did before we went digital.

Just because you can do something (like emailing accounts) doesn’t always mean you should.

Gotta go – just heard the postie. There’s probably some Telstra bills – you know the ones. They fine you $2 for the privilege of being invoiced and fine you another $15 if you’re a day late paying. No wonder its profit is $Billions. 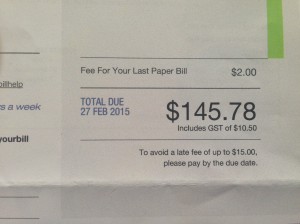 I obviously work in the wrong industry….

Are you being increasingly cyber-stalked lately? It seems to happen more and more these days – thanks to the users of marketing automation, particularly the current digi-flavour-of-the-month – remarketing.

Here’s how it worked for a friend of mine – aged 62. She was looking online for a baby gift for her niece who was having her first child. She eventually found and bought one.

Then, thanks to the marvels of marketing automation, every time she went online for the next six weeks, she was confronted with all manner of ads for breast pumps, nappies, post-pregnancy fitness programmes and products that were completely irrelevant to her.

And that’s one of the big problems with remarketing – it’s nearly always after the event. Yet it doesn’t have to be. If marketers realised how to use their small data they could really make this data-driven tactic work.

Here’s how a lack of attention to small data has affected my online experience recently. Last week I bought a desk accessory online from a company called Varidesk. Hopefully it will be good for my back. I did some searching, clicked on their page, checked out their credentials and bought.

And now, instead of providing me with customer service, they won’t stop following me around the web – constantly trying to flog me the product I’ve already purchased and now had delivered.

They sent me an email message confirming my order, so they can contact me directly with personal messages. But somebody in sales or customer service hasn’t told the digi-kids. So they are treating me as a prospect and trying to flog me stuff via banner ads, even though I’m a customer.

I would have thought it was easier to record the simple data from a sale, than to invest in chasing the wrong people online? If it’s so easy to recognise someone who has visited your site and then stalk them around the web, how hard is it to recognise the small (but significant) data point of a sale?

Here’s what I see now whenever I go to online news sites: 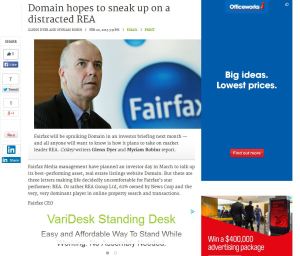 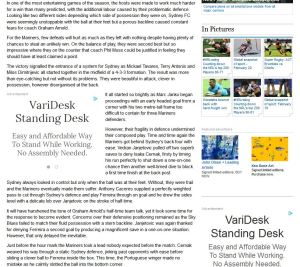 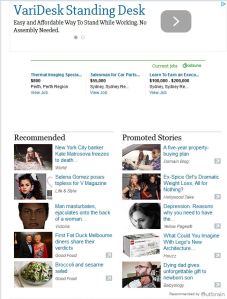 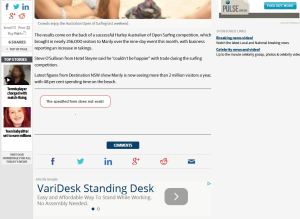 All it would take is a simple automated digital communication between the customer transaction records and the remarketing tool. It is not difficult to do. And then, instead of pissing me off with irrelevant remarketing, they could provide me with customer service.

It’s another case of the small data being more powerful than the big data. But because people are ignoring marketing basics in the pursuit of the latest bright shiny digi-object and industry buzzwords, the bleeding obvious is overlooked.

On another note, I’ve heard that latex mattresses are good for your back. But I’m a tad nervous to search for them. Can you imagine the ads that will appear on sites after I search randomly for latex products! The mind digi-boggles…