One of the hats I wear is that of university tutor. I’m teaching “Advertising Principles” and one of the ads the students are analysing, is the famous Apple television commercial – 1984.

This is interesting in a number of ways, the main one being none of the students were alive when the ad ran. It is at least a decade older than the students – frightening really.

A quick glance around the room and you can see the power of the Apple brand. Of those students who use a laptop or tablet to take notes (or surf while I teach) all but one uses an iThingo. Australians have the highest per capita ownership of iThingos in the world. 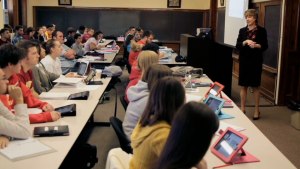 But one student stands out – he has a new Microsoft “Surface” tablet. I asked him why he bought it instead of an iThingo and he said it was a better tablet. I couldn’t argue as I have no idea which is better, though when asked, everyone has an opinion about it.

I then asked him how he felt being one of the only ones who owned a Surface on campus. He smiled a wry smile and said “a rebel“. Apparently other students have been ribbing him about his choice of tablet – but this only gives him a sense of pride in his individualism.

If you had asked me to do a word association test with Microsoft, the word “rebel” would not have made my list – ever. Let alone “individual“. Just picture all those Mac versus PC ads, Bill Gates versus Steve Jobs – the brands are poles apart. Back when, Apple was the challenger brand to the Champion brand of Microsoft and the associated PCs.

As a result of this insight, we explored the position of the Apple brand today, compared to when the 1984 commercial ran. For those who don’t know, it only ran once at halftime in the Superbowl.

In the 1984 ad, IBM was positioned as the big brother computer company forcing all people to comply like slaves without choice, to IBM standards. The Macintosh was supposed to set people free from IBM (and PCs) and give them choice.

The Apple ad was to reflect George Orwell’s book 1984 and was directed by Ridley Scott, famous for Blade Runner and the Alien movie series.

Fast forward 30 years to 2014. Now Apple is the dominant computer brand (and has just partnered with IBM in business products). Users are restricted to the Apple operating system and on most iThingos cannot use software like Flash for example.

Well here’s a thought – Microsoft could become a challenger brand to Apple! It could position itself as a rebel brand for those sick of being an iSheep. 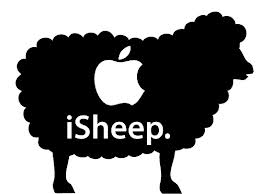 Imagine Microsoft versus iThingo ads, where iThingo was the grey standard while Microsoft was the bright future?

Given the way digi-fashions change so quickly, anything is possible. After all, geeks now rule the marketing world.

Just look at what designer stains have done for tattoos – you’re not a celebrity unless you have a (obviously visible) designer stain. Only a few years ago the only people with tatts were bikies, criminals, returned vets and ladies of the night. Now school teachers wear their stains with pride.

So it’s not beyond the realms of possibility that Microsoft becomes sexy and once again rules the world! That in itself is a scary thought – but from a marketing perspective it’s a delicious one.

Though as much as I don’t like to say it, they’ll have to rebrand first – that logo is sooo last century. And it has no retro cred.

I’m off to check the share prices – you never know…

1 thought on “Is Apple the new IBM? Can Microsoft become sexy?”