The tragic bush fires currently burning in western Sydney and NSW reminded me of the first (and only) time I officially fought a bushfire – and its similarity with digital marketing.

It was a long time ago, but one of my mates Bob, was a volunteer rural fire fighter living in the Blue Mountains. He’d invited me to a Sunday BBQ in Winter. His neighbour, the Deputy Fire Chief, joined us. It was a beautiful sunny day and we were enjoying a lazy lunch with a few drinks.

Then the phone rang.

There was a bush fire by the Hawkesbury River threatening some holiday homes. We had to cut short the lunch.  The Deputy Chief had a few too many drinks, so I offered to help, as I’d only had a couple.

The Deputy Chief gave me his overalls and helmet and off we went. The fire was in an area only accessible by boat, so we had to get to a wharf, load some pumps and wait til the crew arrived, before heading off in the dark in two sea-worthy craft.

Eventually we saw the flames which by now were up against two homes and their gas cylinders. We moored up and started to get the gear sorted so we could pump water straight from the river. This can have consequences if you suck up crap from the river into the pump, so the experts looked after the pumps.

I was given a specific tool for cutting bush and covering flames with dirt. It was a low-risk job, but had to be done to put out the fire and prevent spot fires flaring. I worked my way up the hill doing my best to extinguish flames while my face turned black and my casual shoes destroyed themselves in the ash on the ground. I was watching the technique of two other blokes who were working alongside me and obviously knew what they were doing.

When I finished atop a small ridge area the two blokes who were with me shouted out “what do you want us to do now boss?” I shouted back “what the hell are you talking about?” They said “we’re following you, you’re the Deputy Fire Chief“.

I then explained I had no idea what I was doing and was following them. They had assumed that because I was wearing the Deputy Chief’s kit, I was the Deputy Chief and had some semblance of knowledge about what to do. The blind leading the blind – if it wasn’t so dangerous it would have been funny. 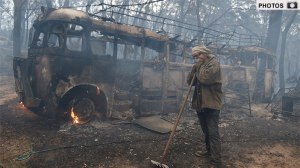 We did save the homes with only one gas bottle exploding. You don’t want to be near one of those when it happens. I made it home in the wee hours of Monday morning and took a week to get the soot out of my skin.

But what happened in the heat of the fire reflected what’s happening in the the digital marketing industry. Because I appeared to have the credentials the other fire-fighters assumed I knew what I was doing – much like the alleged digital marketing experts who fool people into believing they know all about marketing.

A colleague of mine is despairing about her client – one of the world’s largest computer brands. It has been convinced by alleged experts to stop its lead generation advertising and focus on Facebook, Twitter and LinkedIn. I’m sure that’s where the CEOs and CIOs are spending their business hours.

They are measuring time spent on a landing page, rather than responses. And they’re wondering why sales are down. They’ve been fooled into following fashion.

And it’s because in this industry, anyone can claim to be an expert and convince others they know something the others don’t.

Publish a ‘white paper’ – you’re a content marketing expert. Tweet every day – you’re a social media guru. Use new buzzwords regularly – you must be an influencer.

Today I received an appalling email offering insider email secrets for social media experts – WTF? It’s so wrong it’s sad. I deleted it, then changed my mind and opened it, just to see what it was about – a complete load of hogwash. But hey, someone published some content, so they’re now an expert for email in social media. I’m sure that’s filling a gap!

Maybe if these alleged experts spent their own money fighting the fires of business survival, they might learn what really works and what doesn’t in the world of marketing – both analogue and digital. And they’d stop trying to big-note themselves with faux expertise and focus on doing the right job for their brand, rather than the right job for their portfolio.

And if you have time to donate to the victims of the fires, this page has the links to the donation hotlines: