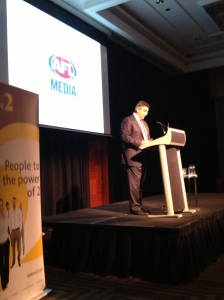 I recently attended an excellent lunch in Sydney hosted by Talent2. The guest speaker was the CEO of the AFL, Andrew Demetriou, on the day the AFL was being threatened with legal action as part of the Essendon issues. Andrew was genuinely very happy to be in Sydney.

In his presentation he revealed the future that digital technology was going to play in the AFL’s direct marketing plans. They and the various clubs will be able to talk directly with their fans in such a way that the fans will eventually be able to order a meat pie delivered to their seat at the stadium, paying for it with a digital wallet. 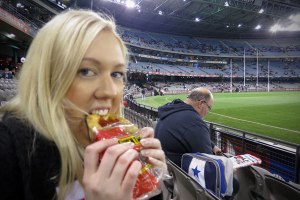 It will be good for pie sales, though I doubt it will help heart conditions or waste lines. At least you burn a few calories climbing the stadium stairs to get your dog’s eye with dead horse.

Andrew also shared all manner of statistics gained from measuring their marketing activities, including user numbers, content downloads, revenue streams, media usage as well as new plans to add even more value. It’s ironic how brands are finally paying heed to the value of data, given the attitude to data prior to the interweb.

The AFL is a media organisation in itself and will leverage its content and merchandise to increase revenues in many different ways via direct contact with the fans. You only have to look at the powerful EPL clubs to see the possibilities.

It’s a very exciting time for direct marketing in sport – as that’s where true fans come into their own as far as spending money goes. They are far more powerful and profitable than Facebook fans for example. Fan databases are the rivers of gold that will fund the revenue growth of the big sports.

I lived in Melbourne when Andrew was playing in the VFL. My girlfriend at the time was a former Miss VFL – am not sure what she did to win, apart from being attractive and being Miss Carlton, Essendon, St Kilda or whateever team she represented. I’ll protect her identity by not naming the club.

She was a lovely lady – intelligent, articulate and held a senior management position in an international company. But come Saturday morning, she grew a second head. I’ll call it her VFL head. And it was in complete contrast to her usual personality.

She took me to my first game – which was an experience in itself. It was in the days before big screens at the grounds and we were near the fence down the front. This meant when the game was on the other side of the field, you couldn’t see the play. So people had radios on, played cards and knitted until the game came back into view. It was very communal.

Suddenly my girlfriend’s colleagues started shoving me and questioning what I was doing. I said “I was applauding the football”. They screamed back “you’re not here to watch the football, you’re here to hate Collingwood”.

you’re not here to watch football, you’re here to hate…

I’d never experienced such tribal attitudes in sport – and I used to get paid to play, a long time ago.

So I described this to Andrew and asked if the AFL specifically worked on creating such tribalism. He explained the game had been going for so many generations that you were born into a team. Your grandparents followed them, your parents followed them and you followed them. Unless of course you wanted to start WW3. Apparently he lives in a mixed-team household (caused by marriage) so it can be difficult at times.

Tribalism works well for teams with a heritage, but it literally takes generations for a team that has been manufactured as a start-up, or moved to a new location, to build a local fan base.

It’s why the new AFL team in Sydney will struggle for quite a while – it’s called GWS. It’s a new football code in an area that has lots of kids, but not many have grown up playing or watching the AFL. And given the competition from ARL and the A-League, it will take a while for the GWS tribe to grow into anything meaningful. It’s why the AFL is spending enormous amounts to attempt to build a critical mass of young players at grass roots level, because without kids playing the game, no adults emerge to play it or support it.

Kids also need heroes to aspire to and emulate. So when a new team like GWS isn’t winning, it’s harder to inspire locals to support it. But the AFL obviously has loads of money to invest and just as over a couple of generations, the Sydney Swans gained support from those other than “people in Sydney who used to live in Melbourne” so GWS may build a solid fan base.

There have been a number of casualties in the ARL/NRL and A-League, partly due to a lack of fan support – which translates directly to lack of revenue.

Maybe GWS should advertise for local AFL fans who hate Sydney Swans? It would be easier to convert them, than to convert fans of other codes and it would help build the local derby.

All that earlier talk of food, I’m off to the bakery.