Never in the history of marketing (although telemarketing runs a close second) has a media been so readily accepted by customers, yet so comprehensively abused by marketers, that within a few years of the media being invented, laws were passed to ban its use.

And so it is with email.

Thanks to marketers and digi-scam-merchants abusing the privilege they were given to enter people’s in-boxes, spam laws and security systems now exist to protect consumers against marketing via e-mail and to stop messages reaching in-boxes.

The other big mistake made by marketers was to replace direct mail with email, because it was cheaper for the marketer, rather than because it was what the customers wanted.

The impact of these activities has driven down the open-rates of email messages and in some categories has made the media less effective than it used to be. My company owns an email software service, distributing and tracking millions of emails per annum and we know through our monitoring, that average email open-rates have declined. Only those who are smartly segmenting, constantly testing and multi-stage messaging have maintained or increased open-rates.

So if you moved from mail to email to save money, you’re going to have to move back again and contact customers and prospects using both mail and email if you are to succeed. The best results are achieved when email is integrated with direct mail and other personal media.

Interestingly, when I ask for a show of hands of marketers who want more email in their inbox, nobody raises a digit. Yet when I ask who wants to do more or better email marketing, many volunteer their hands.

Email is still the most popular way of communicating and will continue to be for a while yet. Here’s a table from Mark Garner’s research last year about what Australians do first thing each day. 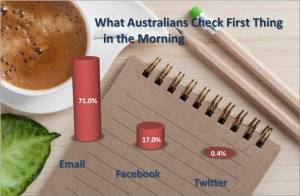 I opened Australia’s first email marketing agency BuzzMail in the 90’s and wrote the world’s first non-American book on the subject; Email Marketing Made Easy. In the early days we sent Flash files as attachments. I remember a driving competition we created to promote Comm Banks car insurance – huge viral effect. Then streaming video emails appeared that started immediately in your inbox when you opened the message. We launched PlayStation’s online gaming this way, getting a massive increase in registered users as a result of the message ‘going viral’ as they say.

Most viral email is in fact viral-lite – see previous post. To see how to really do a viral campaign, view the Obama message that was sent the week before his original election. It was to encourage people to go to the polls and vote. Click here. It’s way more professional than the digital dross dished up by the dullards during this diabolical election.

Eventually the spammers forced legislation to be created and technology started to block streaming content and now even blocks images.

Despite being used for over 15 years, many marketers still don’t understand how to use email to its fullest potential. Email is not a once-only blast. To make email really perform at its best, don’t just send one email message and assume the job is done. The beauty of email is the ability to track who opens messages and who clicks on links. This allows the marketer to send more relevant follow-up messages to recipients based on their behaviour to the first message. You’d be surprised how many marketers don’t use email this way.

Whenever I send a follow-up message to people who have opened and clicked on a link in the initial message, the follow-up message almost always gets twice the open-rate as the initial one. Try it yourself. This simple tactic works. And it’s one of the reasons email open-rates will rise again, as marketers learn how to use email marketing more professionally.

And the largest wine club in Australia still receives up to 90% of their orders from e-mail offers, via that digital device – voice over data lines – known as the telephone. People don’t trust that their order has been received unless they talk with a human. Though as time goes by, I suspect this attitude will change as trust in online ordering improves.

Email is a lousy acquisition media, but excellent for retaining customers and reducing attrition. The only way email is effective for acquiring new customers is through referral campaigns, known digitally as viral marketing.

They subconsciously ask themselves:

2. What is it about? Is it relevant to me? (Subject Line)

If they know who you are, then you have a chance your message will get opened, but only if the subject line is relevant to their relationship with you. The appearance and design of the email content doesn’t matter if the recipient doesn’t open the message.

One of the other impacts of the protectionist technology that blocks e-mail messages, is that formats have regressed and are far more restricted than they used to be. You can no longer stream video into an in-box direct within an email message – you have to link recipients to landing pages, or stream the content from a link within the message. So the new rule is; the simpler your content, the more likely it will be read.

If for example your email message uses an image as the masthead, it may be working against your open-rate, because recipients can only see an instruction to download the image to view it, or a red x in a box. So they don’t bother opening it. Many marketers now use a colour background and a text headline as their masthead and get higher open-rates as a result. This is because recipients can read the masthead in their preview panel and make a decision without having to download images.

If you’re wondering how often to e-mail your customers, ask yourself two questions:

1. “is this relevant to my relationship with this customer or prospect?”

2. “will it enhance the relationship in a positive way?”

Another way to plan your email marketing is to consider what you like and dislike about using email – you’ll probably find it’s much the same as what your customers value. Go figure.