I wasn’t sure whether to post about this or not today. Mainly because it can just add fuel to the fire.

But it reflects something that many journalists have claimed about the interweb world. The majority of posts to journalists are negative. That is, most people who post ‘feedback’ are those that disagree with the writer. Our nature is not to write ‘well done” or ‘I agree with you’. If we agree or enjoy an article, we do so unconsciously and get on with life.

But if we don’t agree with the article/post, our nature is to go on the attack, often in a vile way. And much of the criticism is directed at the writer, rather than at what was written. And these ‘critics’ hide behind the anonymity of the interweb. My guess is that most people wouldn’t have the guts to say to a person’s face the negative comments they publish in their social posts.

Of course when the story is a feel-good one and the only possible comments of sensible humans can be positive, this doesn’t apply. (that’s my disclaimer).

One of the trending topics in social media today is the story of Amy’s Bakehouse. I’m not familiar with the ‘reality’ TV show mentioned in the article, but it obviously influenced some of the comments. 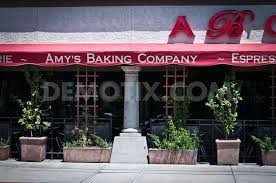 Check it out on this blog.

If you search “Amy’s Baking Company Bakery Boutique & Bistro” you’ll find lots of articles about it.

A couple of points of interest here:

1. The lifeblood of social media is traditional mass media. It’s the coverage by mass media such as television, radio and press that creates the mass awareness of something that is becoming popular in social media. If the mass media didn’t give the posts publicity, they would die on the vine within their narrow social ecosystem.

2. Just because a few people on a social site start a ruckus, don’t think the whole world is against you. If you have good customer relationships and use all the powerful personal media like face-to-face service, mail, phone, email and sms you can talk directly with your customers and continue to keep doing business with them. Yes, you can address the social chatter, but most social chaff will disappear tomorrow as the next ‘shiny bright digi-object’ appears and attracts the attention of those with not much better to do. I’d guess many of the social comments came from people who are not even customers of Amy’s – they just wanted to be critical.

3. When you ask someone for an opinion, what do you get? An opinion! And if you encourage a bunch of people to join your opinion, the majority that do will be the ones with the same opinion. The contrary rarely air their views, because they just aren’t as interested as those with opposing opinions.

4. Group think and herd mentality are rife online. The author of the post says the episode was embarrassing. And it was, not just the stupidity of Amy’s Bakehouse (at which a friend of mine, coincidentally named Amy, used to work), but also of those who posted comments. In their twilight years I wonder if they’ll be reflecting warmly about those things they used to post online?

5. There is a growing backlash against the trolls and naysayers who constantly attack people and companies via social sites. Apparently Amy’s “Likes” have gone through the roof, which is one way people with contrary opinions can show their support.

6. Every day there is a new “Most Epic” or “Biggest Fail” on the interweb. It’s become a pi**ing competition to see who can make the most outrageous claim to position themselves and their digi-wind in cyber real estate.

I have no idea what the owners of Amy’s Baking Company Bakery Boutique & Bistro are really like. I hope for their sake this is just a speed-hump and they learn from it and continue to trade. We’ll keep an eye on it – that is unless another shiny bright digi-object doesn’t attract our attention.