My blog has been in recess over the last couple of weeks – 2 deaths in the family within 2 days, sort of puts blogging about social media in context.

Am back on the horse now, here’s something I’d started a couple of weeks ago:

Thank you for all the positive feedback on the recent social media blogs. Over the next couple posts I’ll share some of the research I have discovered while rewriting my marketing text, which should hopefully be complete in a couple months.

One thing I do for a living is train marketers and business owners. In the last couple of years, the delegate’s reactions to my social media presentation have been quite interesting. Because there is so much BS and confusion about social media, there is enormous anxiety among business owners about whether or not to ‘invest’ in social media.

Interestingly I’ve never had so many delegates thank me so enthusiastically following a presentation. Most are just relieved to learn their business won’t collapse because they don’t tweet every day or don’t have a FB page. From around 2,000 delegates in the last 2 years, less than 5 have been able to make social media pay for itself. That’s not to say you can’t get a positive ROI on social media – but there’s a reason it’s not called “Business Media“.

If all social media disappeared tomorrow, nothing would change in business. The world would carry on and goods and services would continue to be traded.

The main impact would be the inability for companies to react to complaints as rapidly as they now can when tracking social posts. Curiously if companies had provided decent call centres that were staffed by locals, they could have developed a customer service culture where complaints were handled simply over the phone – the customers wouldn’t need to use social media.

Instead, companies pay people to track complaints via social sites, follow-up these complainers via social channels and try to get them on the phone to solve the problem – as most cannot be resolved via a tweet. Go figure.

When you look at the regular published lists of “Top Social Media sites” the best are inevitably major global brands like Coca Cola or Starbucks – brands that can afford to spend a fortune in such a channel without measurable results, like they do in brand advertising. And rarely do the Top sites reveal costs associated with being a top site – which is usually massive.

Search engines like Google now include social media presence as one of the factors when assessing a site’s value for search results. They do this because they have a vested interest. Google owns YouTube and Google+ so businesses are being forced to use social media even if they don’t want to. This becomes a major problem for businesses without strong brands, in categories where the customers search the product category rather than the brand name.

The stronger your brand name as a key word, the less you need to rely on SEO and PPC. But that’s another blog. 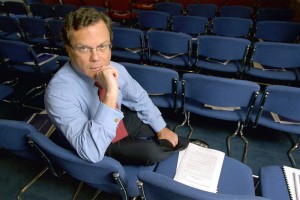 Sir Martin Sorrell’s WPP Group manages more social media campaigns than any other agency group on the planet. Here’s what had to say when interviewed about social media:

“…it’s not a medium that really lends itself to commercial exploitation. And when you look at the times that people have tried to commercially exploit it, it’s not always failed but often failed.”

“These are extremely powerful channels and new media. The more you try and invade it with commercial messages, the more at risk you are. Everyone is keen … They get the hits and get the traffic but it’s very difficult to monetize. It may be intrinsically due to their personal nature; they are not media that lend themselves easily to what we’re talking about.”

I found some interesting eye camera studies on social sites from a couple of years ago. The sites have changed their layouts since, but you’d find similar results today. The YouTube study was done in the week following Michael Jackson’s death. Under the hottest part of the map is a MJ video, but there’s also another MJ video lower on the page that doesn’t rate an eyeball. 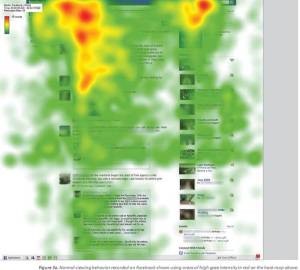 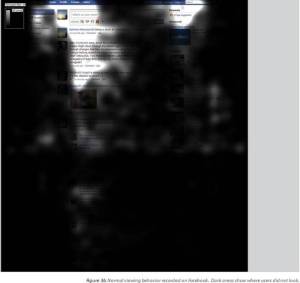 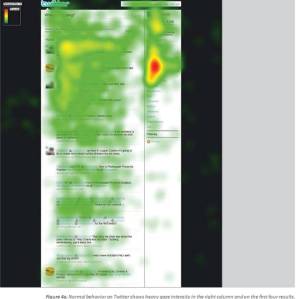 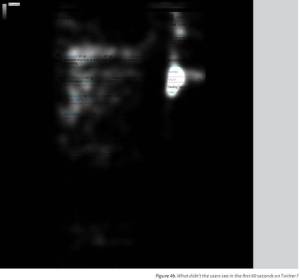 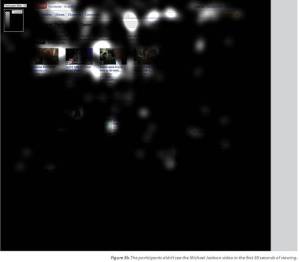 It confirms what most of us know – people only focus on the latest posts that are on their screen at the time they are on the site. They rarely scroll below the fold. It’s why I created the acronym – ASS Time – to describe the “Connection Paradox” – the more people you are connected to, the less chance you have of seeing or reading their posts.

There’s an article in the Fairfax press about why small businesses have to be social to survive. You can assess the value of the content, but interestingly I searched the content and the word ‘costs’ or ‘return on investment’ are never mentioned.

Once again people making money by telling other people how to make money – even though they don’t make their living practicing what they preach. This is typical of so much publicity around social media. Business owners and marketers want information about the cost and ROI of social media, but promoters of the channel are loathe to supply it.

Smells a lot like 1999, just before the dot.con crash.