Huddle up tight folks, I need your help. This is not a simple problem to solve.

My son started at a new school this year and so did a family from the USA. Their son and ours have become good friends. We’ve also become friends with this family and the father, let’s call him Joe, cannot stop saying what a wonderful country we live in.

I’m purposefully not saying their real names for reasons that will become apparent.

They have been posted here for a few years. Joe has a very high-powered job that has him travelling around Asia. They are renting an amazing home on the hillside of Balmoral Beach – a lovely suburb on the north side of Sydney Harbour. Here’s a typical view:

Last week, they received a notice that their street would be disrupted occasionally by a film crew over the next 3 months – with the usual apologies and contact numbers for discussion. They were a tad concerned. It’s hard enough learning to drive on the left side of the road, without also having camera crews in your face.

The notice referred to the address next to their home. So eventually they met and introduced themselves to their new neighbours with the film crew.

Guess whose their new neighbours were? And how damn inconvenient. Yes folks, our new friends are living next door the cast and crew of “Australia’s Next Top Model” hosted by former Miss Universe, Australia’s very own Jennifer Hawkins. 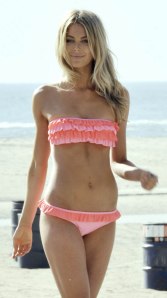 Well you can imagine the problem this has caused Joe and every father of his children’s class mates. The poor sod is having his life disrupted by sweet young things gallivanting in the pool next door – which by the way you can see from the entrance walkway. I only know this because when I was visiting their home last weekend to drop off their son after a visit to our home, I glanced over the fence and just happened to notice 6 models in bikinis doing their aqua-exercises. Gosh they exercised for at least 20 minutes. There were trees in the way, so it took a while to glance.

So this is the dilemma faced by my new best friend in this foreign country – he needs all the help he can get folks. Does he:

1. Run his own live stream video from his roof-cam on You Tube and make money from advertising revenue?
2. Get the model’s autographs and sell them on eBay?
3. Invite Jen and the girls over for a house warming BBQ and discussion on the rights of tenants in modern society?
4. Work from home for the next 3 months and forget about the Asian market?

I’ve offered to help him make the decision and have set up daily planning meetings at his home, so he doesn’t have to face our peak hour traffic. The fathers in the parents group at school have also unselfishly volunteered to assist – that’s good old fashioned Aussie mateship for you.

I’d welcome your suggestions too. The girls next door are very friendly and not shy at all. They eagerly asked our friends if they had any sons. The mother said “yes, one, but he’s only nine” – so the girls lost interest in the conversation and went back to the pool.

I’m not a fan of reality TV shows, but given my connection to this one, I may just watch it to support my new best friend. Where’s the remote!

9 thoughts on “Your help please, particularly if you’re a red blooded Aussie male…”