I had a conversation last week with the country’s best copywriter and author of Write Like You Mean Business, John Hancock, during a meeting with a ‘digital marketing consultant’. Hancock made one of his typically astute comments. 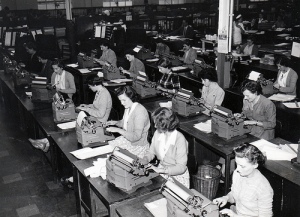 We pondered his comment for a second or two and then promptly agreed. Social media requires masses of humans to spend head hours working at machines doing repetitive tasks, churning out their product – known as content.

But at least the industrial age had automation and consistency of product, with everything created on an industrial line being the same. The bio-mechanical processes provided by humans were identical for each worker as they operated machines that did most of the production work.

This is the one difference with social media production. The output is completely inconsistent. Some ‘publishers’ are prolific. Others are spasmodic. Most content is never read and much deserves not to be. The speed of production varies enormously as so few publishers have been taught to type. They do the two-finger hunt and peck in a massive waste of time and cost.

I always ask my seminar audiences the following question: “who can type at 120 words or more per minute, like an average secretary is trained to do?” Invariably less than 1% can. And as we all know from the OECD Research into international literacy in Western countries, over 70% of people have difficulty understanding what they read, let alone what they write.

So the content online is being created at great cost by people without typing skills, who cannot read or comprehend very well and in most cases have no formal copywriting experience or training. It’s a frightening thought. But you only have to spend a few minutes on Twitter or Facebook to know it’s true. And the cost to companies to keep their social media up to date and respond to commentary is enormous. Though most marketers are hiding the cost in the salaries column on the P & L, so the cost is perceived to be much less than it really is.

The digital marketing consultant in our conversation said he’d been working on social media campaigns for clients for over 2 years and was yet to see one pay for itself. He also said the same applied to a lot of SEO work – it rarely paid for itself, but it’s seen as an essential cost.

But back to the industrial age. A marketer I know is paying Indian slaves to generate 10,000 “Likes” for his website at a cost of only $100. Apparently some very stupid investors think the more “Likes” you have, the more valuable your site. Wouldn’t you like some of their money?

So somewhere in India there is a room full of digi-slaves, sitting at computers creating fake IDs and clicking on “Like” buttons to deliver their contracted job. It’s an industrial age model in the digital age. And I suspect they have been trained to type at 120+ words per minute, otherwise they don’t get employed.

Interestingly I have an Indian colleague who has a large digi-slave business, but he is now outsourcing to South America, because he can get cheaper digi-slaves there. You have to wonder the quality of service if you can buy it for next to nothing from India, and they can afford to outsource the job to South America.

Some digi-slave suppliers use home-based workers, who log-in from remote locations to do the job. So it’s not the same industrial-age factory structure in the work environment, but it’s a similar cost structure to do the job. Apparently a pet food brand in Australia pays back-packers to post about their cat and dog food brands, depending on their pet preference.

So if you want to publish regularly online, it may be easier to dictate your message, send it to a digi-slave and get them to type it for you. Then you can edit and publish far more efficiently. That way you can spend your time doing what you do best to make a living, which may be selling (rather than typing) for example.

I suspect if you want an investment tip to make some money, buy shares in a Carpel Tunnel surgery – I’m sure the incidence of that syndrome is about to go through the roof, as more and more people who are not skilled to do so, are forced to type for a living.