If you were watching or listening to the Super Bowl yesterday you will know there was a power black-out. I heard about it on radio news.

Oreo Cookies were an advertiser and their marketing team was apparently watching with enthusiasm on a Sunday evening at their office. The humble Oreo cookie has now become as famous among the social chatterers as the blackout itself.

After the blackout the Brand Team sent a tweet with the following existing advertising image and it has now been retweeted and posted globally in online media. 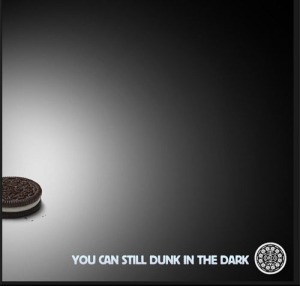 The advertising industry reported on it as urgently as possible, each commentator trying to be the first to report that Oreo was the first to run an ad referring to the blackout – before it became stale biscuits in terms of news. Here’s what Oreo agency President Sarah Hofstetter apparently told BuzzFeed; “We had a mission control set up at our office with the brand and 360i, and when the blackout happened, the team looked at it as an opportunity,” and “Because the brand team was there, it was easy to get approvals and get it up in minutes.”

Gotta luv advertising and marketing-speak haven’t you. A mission control set up to watch an ad on a football show? Were there links to NASA? Multiple screens with workers in headphones communicating with each other? Houston we have a problem, the cookie is crumbling…

But full marks to Oreo. They were able to capitalise on the blackout. If it hadn’t happened they would have just watched the show at Mission Control and gone home.

And of course the humour about the blackout is now flying through cyberspace, so expect a few jokes in your email and social pages.

I doubt anybody ate more Oreo cookies or washed more clothes in Tide, but the actions have created some noise about the brands, so someone in their marketing departments will be happy.

1 thought on “Oreo and Tide shine in the dark…”