There’s hardly a person amongst us who isn’t busy. And because we are, we rarely get time to sit back and ask questions – particularly about the everyday things in our lives.

Take tea for example. I’ve always liked a cuppa. But I have never been a fan of tea bags. In fact, over 25 years ago, my Creative Director’s wife made me a pottery tea pot and tea cup. Like me, she enjoyed her leaf tea and thought I should do so as well, particularly during those infernal meetings at work. She was a pottery artist, so it was a wonderful gesture and the ‘tea-set’ lasted years.

But I digress. The thing that has frustrated me for years about leaf tea is the packaging. I’ve tried different brands and have always been a bit of a Twinings Russian Caravan drinker. The problem with the Twinings packaging though is that the plastic bag in which the tea is contained is sealed for life. It is of such industrial strength that you cannot simply tear it open. If you do muscle the PVC apart, the majority of the tea flies everywhere as the bag splits open in a sudden catastrophic rip. You then spend days cleaning tea leaves out of every crevice in your kitchen and your personage.

The fact is if you are to avoid “the great spill” you need box cutters or scissors or some other sharp device from the second kitchen drawer, to cut open the plastic bag. Even then it’s hard to get a neat cut so your tea leaves don’t spill everywhere.

So it was with great delight that I recently spotted the Nerada tea packet on the shelves at the local supermarket. The Nerada tea mob has obviously taken time to think about the problem tea lovers have when first opening their tea packet. And they’ve done something about it. They have built an ingenious spout into the packaging, so you can pour the tea directly from the packet. (see the images below) 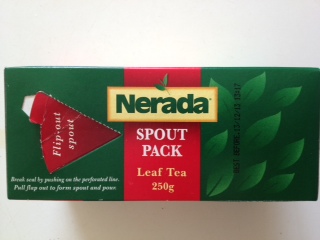 This means there’s no hassle plying the PVC packaging when you first open the tea packet. You don’t need a separate storage container, as the tea is stored in the original (branded) packaging. It’s simple to use, doesn’t make a mess and so obvious in hindsight. Why didn’t anyone invent this earlier?

My guess is that as people observe Nerada customers pouring their tea from the packet, sales will increase, as new customers try the tea for the first time. This is clever insight that has been obvious for years, but overlooked.

Another obvious solution that was overlooked has opened a whole new market. It’s the coffee capsules pioneered by Nespresso and the like – particularly in offices. The success of these capsules has absolutely nothing to do with the taste of the coffee – which is ordinary at best. The reason the capsules are a success is because they don’t make a mess – there is nothing to clean up.

For decades office workers have turned into pigs when they used the kitchen at their workplace. There is not an office kitchen in the world that has been kept clean by the people who use it – despite those same people keeping their home kitchens clean. What is it about being in a workplace kitchen that turns people into such grubs? But not anymore.

Now you just put a capsule into a machine, press a button or pull a lever and within 30 seconds you have a ‘fresh’ cup of coffee that is miles ahead of the caterer’s pack of instant coffee provided by management. The most cleaning you may have to do is to throw the used capsule in the rubbish bin, but even that is rare.

So if you are looking for opportunities to grow your business, take time out to make a cuppa and ask “why?” You might find you’re the first to ask the question, because everyone has been too busy – the obvious has been overlooked.

Time to go, the kettle’s boiling.